July 24, 2017
I recently used my previous post on building disc images for the JavaScript based jsBeeb emulator to create an image for a game I played a very long time ago, called Goldbank. Here's a screengrab of the game, while this link will take you to the new disc image I've made, for playing on jsBeeb. 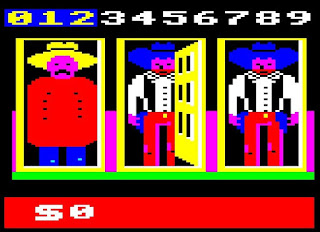 As you can see, the graphics are very basic, but extremely bold, bright and colourful. The game was published on a disc based magazine called Fast Access in the late 1980s and early 1990s. You were sent six issues a year, on two floppy discs, with some printed cards you put in a special ring binder. I believe two volumes were made, while the third dispensed with the printed cards completely, was spread to three discs, and only got three issues, before it went out with a whimper.

Goldbank came on the second issue of volume 1, about early 1989, so it's pretty vintage. However, the game is a great challenge. Do have a play of it.

Getting to build this disc image using my article was more difficult. The available Fast Access images are served as double density discs. Attempting to use the bbcim utility actually lead me to create corrupted images, which subsequently didn't work.

Fortunately, a comment left by Ant mentioned a set of similar utilities hosted/written by Stephen Harris, this time written in Perl. I had more success with preparing the Goldbank image, so I'll detail below what I had to do, in tandem with bbcim.

Popular posts from this blog

August 24, 2021
In August 2021, I released Androidz Redux , a remastered version of my 1994 game Androidz . This process started a year ago, with a couple of days spent playing around with the original code, far away from a real BBC computer. The original game was published in a magazine called Acorn Computing, and has been available to play online for a number of years now. Because I wrote the game on an actual BBC Micro, I used what tools I had at the time, namely some graph paper to create the graphics, and the computer itself to do the actual coding. This is a world away from the tools we now have at our disposal. Fully rounded IDE's such as Visual Studio Code (my current favourite) make it an awful lot easier to program games. Even editors such as Notepad++ offers some ability to edit BBC Basic code. One of the difficulties with editing old games on modern systems is ensuring that you are able to ensure that the BASIC code is properly tokenised before running on an emulator/system, and indee
Post a Comment
Read more

March 18, 2016
[July 2017 update - links to BBC games updated to HTTPS links] I wrote this following blog post around Christmas 2015, during that time I posted various BBC Micro games running via the JavaScript based jsBeeb emulator onto Facebook. These games were typically buried within compilation discs, so were not easy to access. Although jsBeeb provides an  auto boot  facility, you still had to go through any menus provided on the disc in order to get access to said game. This post details how you can build your own images, via a special tool, available to build on all platforms. The article follows... As it is Christmas, there's no better time to stoke the fires of nostalgia, and take part in some retro gaming. In the past, a fair amount of effort was required to satisfy your desire for playing of games of yesteryear. Thankfully, browser technology and the incredible abilities of the JavaScript language now make it much easier than ever to play old games. The Internet Archi
2 comments
Read more

September 30, 2020
I sporadically make visits to the BBC Micro games archive , and have a quick blast through some arcade smashes of the past, and lesser known titles. Hidden amongst the catalogue are some real gems. Mike Goldberg's Blue Meanie is one of them. Anyone familiar with the BBC Micro games scene may know the name of Mike Goldberg. An artist and illustrator, he created many pieces of artwork for various magazines during the 80s and early 90s. He has a distinctive style, and is very obsessed with cats. These artistic talents were evident in the games he had published commercially (notably, under the MRM brand - he was one of the M's), as well as within the pages of computer magazines. Most of his work was featured in The Micro User , or Let's Compute! , then dubbed the world's first computer comic. This latter period - from 1989 to 1991 - saw Goldberg produce games for typing in from the pages of the magazine. These games became more and more advanced in design and execut
Post a Comment
Read more